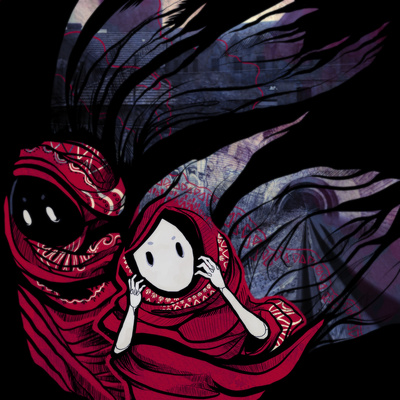 I have a quiet love for carapaces, so this track was a lot of fun to work on! I took inspiration from the official "The Wanderers" album, one of my favorite albums in the Homestuck discography. I was particularly inspired by the album's electronic and Arabic kind of style, which definitely fits the theme of a desert-like landscape in the ruins of a technologically advanced civilization.

In this case, I envisioned Beforus' "years in the future" scenario as being not quite as refined as the Midnight Crew's city, since I kind of doubt the Beforan trolls would have enough teamwork to bother exiling them, but with much more room to build upon than pre-Scratch Earth since the Red Miles and Bec Noir ruined any potential our original exiles had. So the buildup of this song really represents the growth of the Beforan exiles (whoever they may be) and their community itself!

(Of course, there's still the issue of Spades Slick eventually shooting a bullet and destroying the entire universe... yikes. Guess they can worry about that later...?)

I've always liked the juxtaposition between photography and illustrations drawn on top of them, especially creatures and critters interacting with everyday objects as if they were part of our routine, something unseen but still among us. For this piece, I wanted to create something similar, but with a little twist. I wanted both worlds to fuse and be a part of each other. And to answer the "what ifs" by presenting another question: what if, years in the future (but not many) our own universe becomes their reality?