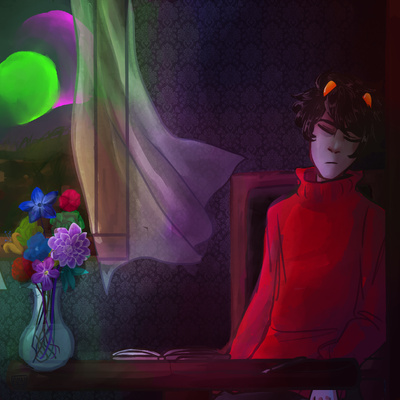 This song is meant to represent the relationship Kankri has with his friends. Due to what we've seen in comic, I picture Kankri to have a strained relationship with the other trolls, leaving him feeling left out more often than not. This piece starts out bravado with a crunchy organ, representing Kankri's own bravado and righteous outlook, transitioning into a sad and lonely bit of chimes and violin. The piece ends with warm strings (they are his friends after all), leaving with a callback to the lonely chimes.

I titled this piece SOlus Vates, which is probably horrible Latin as I've never taken a course, buti t's meant to mean Lonely Seer/Prophet, relating to the left out and lonely feeling Kankri feels around his companions as well as his role as the Seer of Blood.

when i heard the song i just felt sorry for kankri, it represents pretty well how lonely kankri felt in his timeline, so in the drawing i decided to put kankri in a place where he would have spent most of his time during beforus, and i thought a library or some sort of study would fit well! and at the corner of the table some colorful flowers to represent his friends that are kinda with him. i had a lot of fun drawing this! i hope you like the drawing ^^