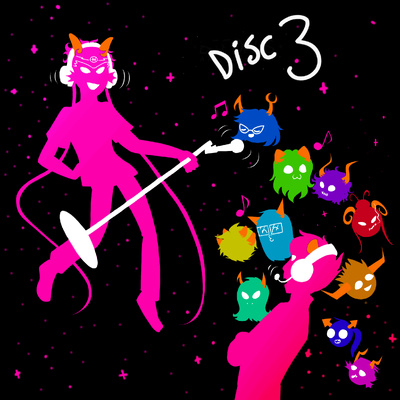 Disc 3 was originally conceived as a "bonus" disc, containing just a couple of tracks that were included in addition to the main body of the album. In the end, though, it grew into something bigger, band became an integral and important section of the album, containing some of our most key tracks. With the same track count as Disc 1, it keeps the album nicely balanced lengthwise, and is characterised by tracks that are somehow different from the principal themes of that Disc and the more narrative soundtrack pieces of Disc 2. These include tracks that did not slot easily into the Disc 2 chronology, remixes, vocal tracks, and a few special pieces for the album finale.

This was probably the first (or one of the first) art pieces made for the Beforus project, as it was also used as promotional art. I was honored to have the privilege of creating it, and kept it simplistic as I did not know what to expect out of the art that others would be putting toward the project later on. Also, I had no other way to quickly create digital art at the time other than with an iPad. I like to think I helped make everyone else's art look even greater! I also thought about karaoke parties while making this, but I think that's perfectly fine.