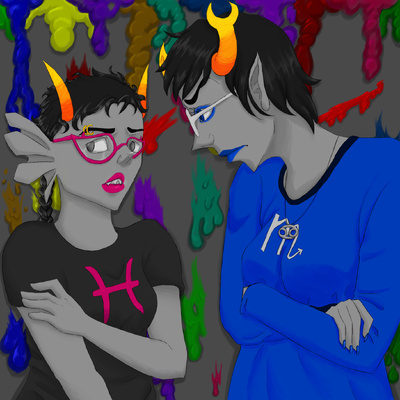 "Past and Present" is meant to represent the action and devastation of the Beforus trolls' past. There are moments inw hich the trolls look with melancholy at their mistakes, but they hope for the future. It's almost as if they know that their ancestors will go on to be heroes.

I took into account how Oliver Hendricks described his piece and decided to make it wholly symbolic, two friends now enemies considering what has happened between them. The blood on the walls is also a symbol of all the pain that the Beforus trolls as a whole experienced. As for the artistic feel I wanted to portray in my piece, I played heavily into the tone of the song itself and used a style more of what you would most likely see in sequential storytelling.