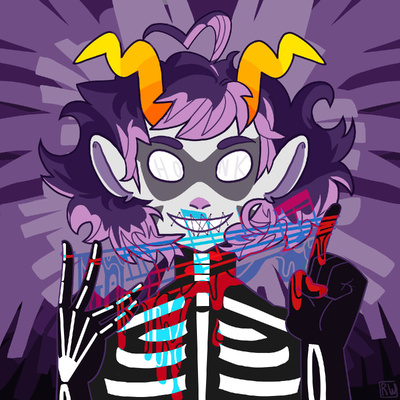 It's a shame that Kurloz can't talk much, because it's clear he has a lot of personality to show. With the appearance of a juggalo, mime and skeleton combined, how could he not? He's apparently calm but creepy or terrifying and boisterous depending on who he's talking to, which is something I wanted to emulate in this track with the contrast between the first section and everything afterwards. However, his true, clownish nature shines at the end, when he takes the last resolving note hostage then rubs it in your face. What a rascal.

This went through a few (very incomplete) iterations before I finished it, mainly because I wasn't sure where to start expressing Kurloz's character; in the end I combined melodies from different versions to make the final product. It's neat how music can work that way!

(P.S The Morse code sounds out "HONK". Because of course.)

I really liked the idea of Kurloz and puppets, and obviously, you need strings to move puppets. From the thought of puppets, to strings, to the red string of faith. And yknow, a string for each finger equals to five strings. It reminded me of piano and such, so from that I just put on some notes onto the bloody strings. Pun intended.