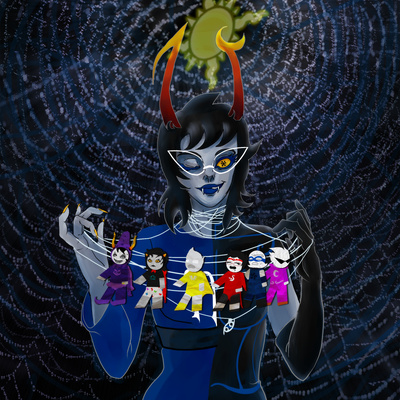 Hey so it's been a while but here's a new track, and for a troll that I never knew I cared about. Admittedly I wrote this song less about Aranea's story and more about a folktale called the spider's thread, which ironically ties into Aranea's story well. I'm not gonna go into details about the folk tale but basically Aranea has a spider theme (obviously) and she came out of a pseudo hell by clinging to a small hope, only for her selfish desires to drop her back where she came from. Man none of this was really about the music aspect, uh, I wrote the song in 4-5 days. That's cool I guess.

I intended to stay faithful to Aranaea's arc and showed her nature through the clothes and facial expressions she wears in "Homestuck". The whole piece was inspired by the theme of spider - how it spins a web through the story, trapping and ensnaring others in the plot, but, if lost, might end up trapping itself in the cobweb. The string figure made from the necklace she wears is called "The Hangman's Trick." It was heavily inspired by the bouncy theme of the music. It shows how she has trapped others (portrayed by paper dolls, a callback to wooden dolls of regeneration and French Pantins, otherwise known as jumping jacks), and herself in it: one wrong move and she'll be left hanging! Of course, one cannot forget about the visualization of the Light aspect, the immortal sun - both holding and being trapped by the web, just like Aranea herself.