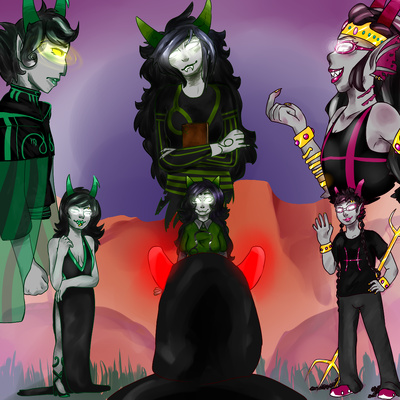 This was my first ever track, composed for the coloUrs and mayhem contest back before we knew anything of Dancestors and Beforus. All we had been told so far was that the Sufferer had been inspired to rebel by his memories of a peaceful world-- so that was what I set out to convey: the idyllic memories of a paradise planet, as well as the sadness of its loss and the tense hostility of the present. It's actually a fairly simple track, made in Sibelius with nothing but built-in instruments and ambient sounds, but I've grown to like it a lot. (People who are into brazilian folk songs can probably feel the influence here.)

I chose the three trolls that I did because they had the biggest impacts on the sufferer's life, so adding their less violent and warmer counterparts was the comparison, but I added the whole gang in another version because I wasn't quite sure you woulda ccept it with only 3 beforus characters. I listened to the song you sent quite a few times and the background was based on it. (I got the general barren but soft vibe from it?) It was a lot of fun, though a bit difficult and stressful as midnight approached, and figuring out placement and what I wanted to do with everything was a bit hard. The background is based on what we have seen fo beforus/alternia, and I wanted to make its ofter to fit a bit better with the music. (I love the composer's work by the way!)