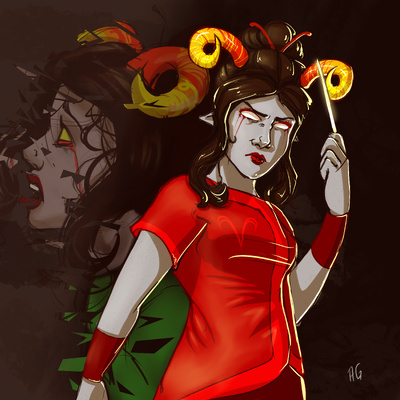 Your life was so miserable oh such a waste!

It’s all cause your friends had just spat in your face.
You used to be fearful that you’d make mistakes, but
your meekness and sweetness have faded away.
And under it all now your blood starts to boil;
You’ll make them all pay for your trouble and toil!
Your boyfriend was cheating and left you distraught.
But Meenah was meaner oh who would’ve thought
that her actions intended to help you along;
and you must know somehow that she wasn’t wrong.
The future is coming; they’ll just have to wait,
but you are determined they’ll all meet their fate.

Why do you feel that we’re always against
something that detriments good consequence?
Why do you try to advocate strife;
living an alternate life?

The Handmaiden comes as a beacon of doom;
she reshapes the past as you watch from your room,
and now looking back you can see what she’s done.
The battle is over but who really won?
You’re being controlled by a glimmering voice;
there’s nothing to do ‘cause theres really no choice;
You’re damned if you do and you’re damned if you don’t.
You want to rebel but you know that you wont
be yourself if you do, how could you go on?
You’re trying to help but what’s right is also what’s wrong
but you have to believe
that you are a person the world really needs.

This work was originally intended as a simple cover for a competition on battleofthebits.org. To make it more unique, I took some inspiration from a song by maxvdubs and wrote some original lyrics; originally they were written about the plot of Dark Souls and the frustrating sense of hopelessness within. When considering what sort of song to make for this album, I realised how well the lyrics seemed to resonate with the story of Damara Megido, and adapted them accordingly. I also recently created an introductory segment (based on the pre-chorus and chorus of the song) intended to depict a sort of inner turmoil as one enters a dark period of their life and is confronted with various emotions including despair, horror, and hatred.

The name of the song refers to the concept of rpedetermination and fate. Damara's wiki page notes that she holds "much fatalism and frustration" within herself; considering that I had named the set of Souls-themed lyrics "Frustration," it felt somewhat fitting that "Fatalism" be its counterpart. Note that although the lyrics are mostly directed towards Damara, the second and third stanzas of the second verse refer to the Handmaiden and her service to Lord English. (Many thanks to my friend Chris for helping me better understand the plot details.)

Drawing this piece and listening to Neon Zenith's song really made me look at Damara differently. I wanted to highlight the inner turmoil that people tend to look over, adding the Handmaiden to show those feelings that she hides. Damara is an incredibly interesting character, and I was just telling someone that I don't draw enough Megidos.