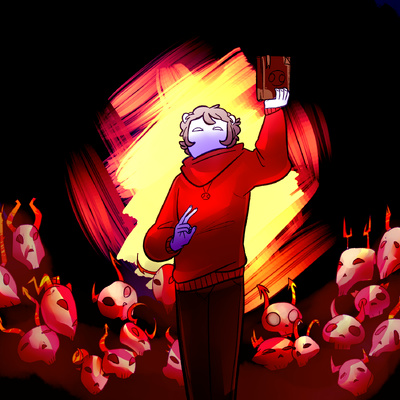 This piece was written for Kankri Vantas. It was made as a march because marches signify authority and Kankri attempts to command the respect of his fellow teammates throughout his session. The faster parts represent that his calm demeanor can be easily shattered by his short temper. I used piano and violin to connect it to the song that I had made ealrier for Porrim called "Antevo+rta." This song's alternate name in my own album is "The Pariah."

The idea behind the picture was tightly tied to the piece itself, and author's descrption. Kankri is trying to be a leader, but all his protection falls back on the civilization long lost and destroyed - taht's why it's Beforan skulls marching right after him. His leadership, his protection is aimed more at dusty pieces and bits of no longer existing Beforan society, rather than his friends in afterlife.