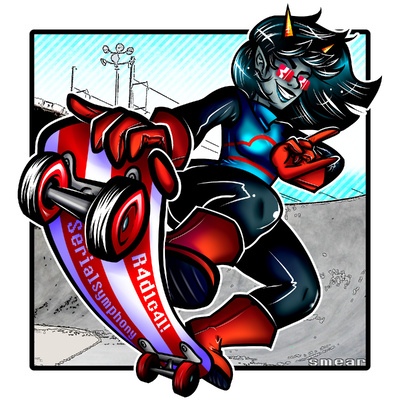 I was pumped that I got to create Latula's song for this album, Pyropes rule, bro. I knew I really wanted to do a low-scale chiptune kind of song for her, mainly because she's such a r4d G4m3r Grrl, and also because all my favourite homestuck tracks were in that vein. Originally I had a way faster, grittier song planned, but after sitting on it for a while I scrapped it and went for the more upbeat, chiller sound of this one, because, let's face it, Latula's way too r4d to have anything less. Fun Facts and Numbers: This song was made in FL Studio, has 16 channels, 9 synths, 1 violin, and took 2 weeks to complete from start to finish.

This piece was inspired by the RADICAL and cheerful tone of its sister song, and aims to show how fun it is to be Latula Pyrope. With her killer body suit, sick moves, and contagious smile, you'll be jamming out with her.