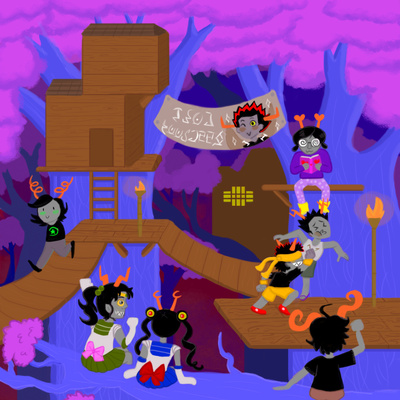 Tree Dwellers was never made to be a piece of music that sounded 'brilliant' or 'genuinely composed'; the simplicity and silliness of the track gave me MSPA feels, so I chose to keep it that way as a silly detail in the Beforus Album.

As MariEater wrote in their track commentary, the song "Tree Dwellers" was meant to be fun, simple, and silly. So for the track art I wanted to show an everyday scene in the village of the Lost Weeaboos; tree houses, trolls dressed up in cosplay, and of course fisticuffs.