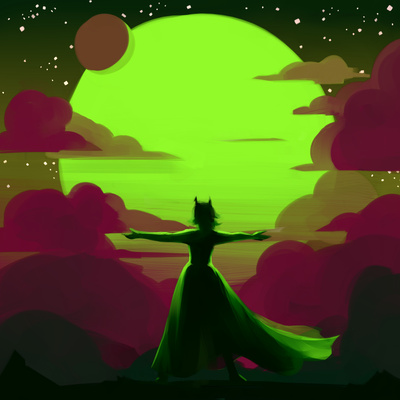 The Light Forms Us

Tracks that The Light Forms Us references:

This song was born out of a desire to remix the theme from Flutterwhat's fantastic "Let Me Dance, Let me glisten", one of the earliest tracks we received for the album. That song is about Porrim, and incorporates ideas of her radiance as a rainbow drinker, and so I had those images in my mind when I was putting this song together. However, for my own spin on the LMDLMG leitmotif, I wanted to give the track a broader meaning, so I decided to turn this into a song about the Green Sun, and how its light shines through the furthest ring and presides over the Beforan session (and many others). I used a similar set of sounds to those which I incorporated into Formant (Sprite Chorus Mix), the eponymous Formant synth common in both tracks always having given me the feeling of radiant light.

The track is nominally about the Green Sun, but the inclusion of the main leitmotif in Porrim's principal track links the Sun to Porrim specifically. I found that an interesting relationship and decided to explore it in the track art. This track gives me a strong ethereal cosmic vibe; to match that, I drew Porrim basking in the glrious light of the Green Sun, which fills half the sky even though it lies beyond the universe, indicating its power and importance. Deep magenta seemed like the perfect colour to pair with the sun's green.