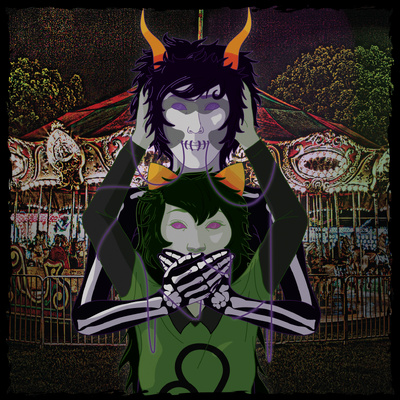 A Meulin and Kurloz fansong. From its light-hearted and delicate beginning, it transitions into the mysterious sounds of an abandoned carnival. Out of the darkness, there rises an oblivious bliss, framed perfectly with the hint of a silent skeletal smile.

A cheerful interaction between friends—or is it? My goal for this image is to show the insidious nature of Meulin and Kurloz's seemingly innocent relationship. Among the static lies a corrupted carnival abandoned years before, or perhaps never used? Unaware of the dark tendrils surrounding her, Meulin falls under the spell of her former matesprit's chucklevoodoo. Behind the stitches a menacing smile appears; in the distance, a silent prayer is lifted.