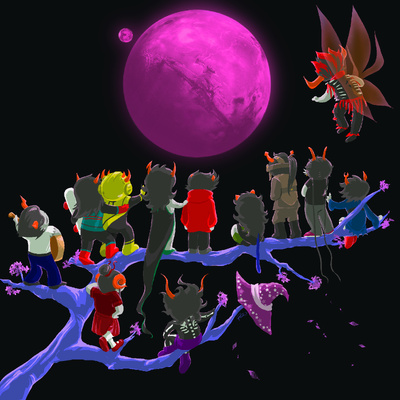 Early last year, I wrote a song called "Featherlight." This is an extended and improved version of it made exclusively for the Beforus Album project and will not appear in any of my own albums. It serves as a mirror for the song Alternia in the album "AlterniaBound." This song is dedicated to Not-Terezi-Pyrope (Blackhole) for making this project possible.

Aranea once referred to the Green Moon as a "large(r) green interloper" that had never belonged to her world. Thus Beforus is represented by the Pink Moon standing alone in the sky; the Beforan players contemplate it from a tree branch of one of the Pyrope's forest. Is this a night before the end? A dreambubble illusion? As the track art for the last song on disk 2, the ambiguity seemed fitting. One way or another, it's now nothing more than a bittersweet recollection of simpler times.