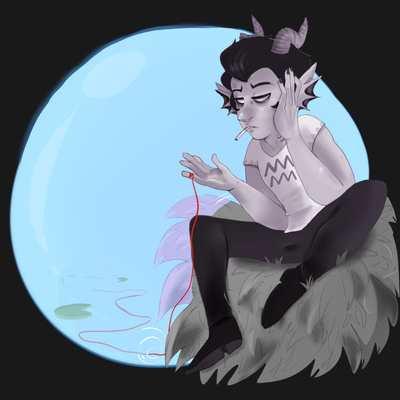 Cronus Ampora is in love with the 1950's era of Earth but wishes he could be in love with somebody. Anybody. This song captures the style of music from that time, starting with Cronus's generally pleasant mood but giving way to his overbearing on-the-make obnoxiousness that invariably drives people away. This doesn't make his loneliness any less real, which is illustrated at the end of the tune by a slow, sad finale. I grew up listening to this kind of music on my parents' radio so I really enjoyed bringing elements of my favourites from the Fifties to life in this song!

It's amusing once more to be drawing Cronus; he's practically a staple for me. That being said, I had a challenging but workable idea of how I wanted to present the piece. Seeing Cronus on a quest for love but failing would eventually lead to that path of sulking, and that is presented within his gray, stormy scheme (that, and the 50's barely had much in color still). With the fact he's outside of a dream bubble (a watery, lily pad dream bubble) where a red string of fate passes, it's almost like he's fishing for a pirze without really getting any bites. T oget even deeper into this harshness, the fact that it's a dream bubble can only leave for his hopes to be trapped in that; a dream. Something that could come so close, yet so far, and he continues trying to get a fish to catch his hook.