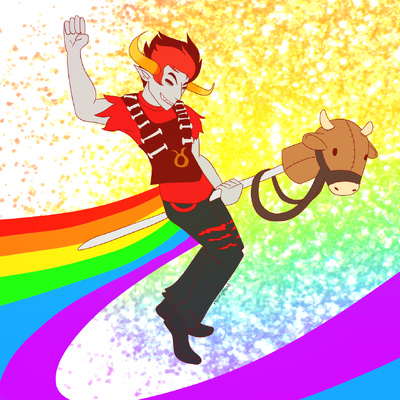 This piece was written for Rufioh Nitram and specifically, his clan, the Lost Weeaboos. The instrumentation was based off "The Brave and the Bronze" by Yan "Nucleose" Rodriguez, with the percussion beat coming from Tavros's song "dESPERADO ROCKET CHAIRS," by Toby "Radiation" Fox. Its musical connection to Rufioh is mostly open for interpretation. This song's alternate name in my own album is "La Tauromaquia," meaning "bullfighting" in Spanish.

When I was figuring out what th draw for the song, I did pay attention to the song's name and also alternate name. Hearing "weeaboo" made me want to put kitty ears on Rufioh, but I scrapped that idea and instea dfocussed on the bullfighting aspect of the song first and foremost. Since Rufioh is kind of a silly character, I thught that it'd be great to gie him one of those little pony riding sticks with a bull for the head. After I finished drawing the main part of the drawing, I was still trying to figure out how to incorporate "weeaboo"-ness into it. Well, weeaboo makes me think of kitties and anime, so my mind went to Nyan Cat. Perfect, I thought, I'll add some Goold Ol' Nyan Cat rainbows, haha. And then, of course, glitter becaus anime. It came out really colorful and I'm happy with it.