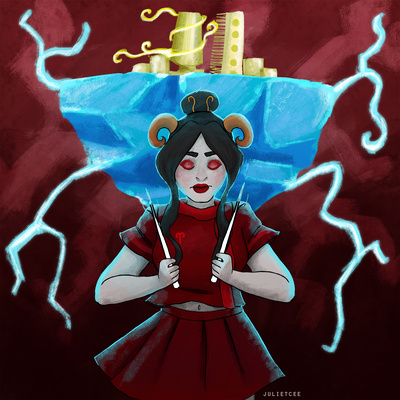 I did this track way back in 2013 I think? Maybe early 2014 back when my computer with my music program still worked. Hah. It all sort of originated with a wager, that I couldn't produce a better Tavros song than the one on the official album. And of course, being the huge procrastinator that I am, I never did. But I did however get the idea to do my own album for the songs of the Beforan Trolls. Again, procrastination got the better of me, but this project came along and almost took the workload I had give nmyself off my shoulders and still gave me an opportunity to showcase what I had done for Damara. It does have the traditional Eastern Asian sound to it with the pentatonic scale, and that's what the song was based upon. Also ghosts. Because spoopy.

I wanted to reflect the sort of spooky feel of the track in this piece, so I thught "what better way to do it than drawing The Scratch, with all those flashing blue lights?" It was a lot of fun to draw, and I like drawing Damara.

(Blackhole here! Just dropping in to point out that, as the Witch of Time, it does make sense that Damara would have the only achronological track art of Disc 2! I suppose she's getting ahead on the timeline action by jumping back to earlier in the session. The Scratch is yet to come!)