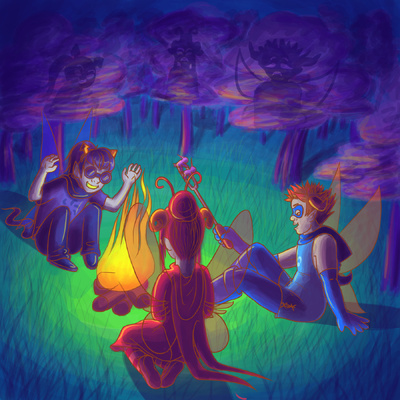 Parsing this one out makes "Damn" "Iterations" + a horse pun. This track was the one that hung around in concept the longest of any of my tracks, but came together the last of them. The original idea was to explore Horuss' own introspections, but that alone wsn't compelling me nearly enough. In the end, connecting Damara's and Horuss' struggles in one musical trainwreck was what propelled me forward. Rufioh takes a back seat to the insecurities and raw emotion of his past and present lovers, existing in tandem. I get the feeling that the session itself weighed heaviest on these two, one doomed to undo it at every turn, and the other to be swallowed up whole in pieces of hismelf. I aimed to convey this through the uncanny, grating musical landscape of the track. It is probably my favorite of the bunch.

One of my first thoughts while I was sketching this piece was the silly nature homestuck tends to express even in its more conflicting parts of story. Capturing that light-heartedness was a goal, and doing so while staying true to the track's ominous tone became a challenge. Hopefully together, they give off a "Calm before the storm" vibe. Admittingly, re-listening to this track after I finished making art for it made it sound cooler than it already was.