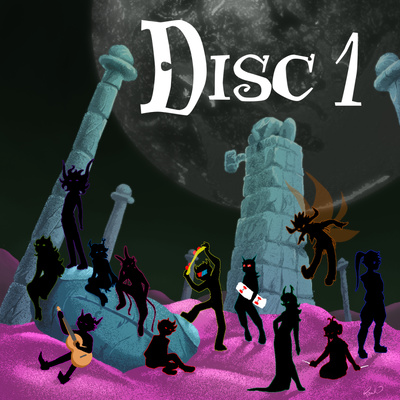 The music here is one of three short bookend pieces I wrote for the start of each Disc, each a section of a longer piece, "Preludes to Beforus". They are not particularly exciting in and of themselves, so instead I'll speak a little about Disc 1 itself. Disc 1 is the part of the album initially designed to contain the twelve "principal tracks", invisaged as the main theme for each of the twelve Beforan trolls. At the start of the project, musicians could actually reserve these spots, but a lot of shuffling happened towards the end. Eventually, each troll ended up having multiple themes on the album, but Disc 1 still contains what can probably be considered their "main" theme, due to its location at the start of the album. With only twelve tracks and the short bookend piece, Disc 1 is far smaller than the longer Disc 2 section.

This is the third artwork I completed for the project, and once again it ended up being a broup shot-- this time at the mod's request. Since it was the introductory artwork for Disc 1, it felt appropriate to me to depect them on the place where it all started, where Meenah claimed to have found the game after running away from her duties: the Pink Moon. And where the game is, so there must be a Frog Temple. Right?