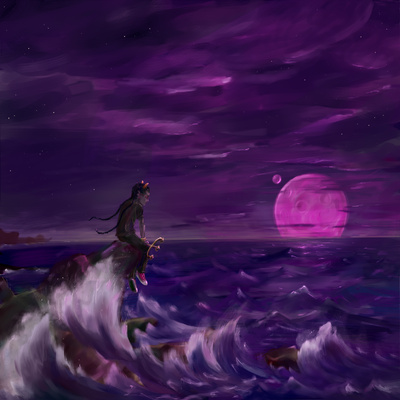 This track was inspired by the fact that, because the corruption represented by the Green Moon was not present in the Beforus timeline, their nights would have been lit by the Pink Moon alone. Pink is a decidedly strange colour to associate with nighttime, but I do enjoy the imagery immensely. This track is meant to evoke the image of a mysterious pink night. It combines ethereal piano accents with a square lead riff that one might associate with Meenah Peixes, who lived on the moon for a period of time.

This piece exploers the visual effects of a pink moon's light on a Beforian seascape and a young Meenah as she contemplates abdication. The drama and scope of the track Fuchsia Moonrise lent itself to a turbulent seascape while the quieter aspects of the track inspired something more contemplative and calm.